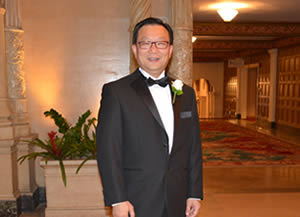 As a successful businessman, Mr. Gong possesses indispensable knowledge of how to raise a small company until it reaches a world-class level and beyond, and as such, is an invaluable asset to the future of Eco Safe.His previous outstanding contributions to the technology and trade industries, as well as his impact on international relations between the USA and China, make him an extremely qualified choice and an essential addition to the board. As the company strives towards greater goals and expands towards a global market, Mr. Gong is sure to offer valuable consultation in the path to Safe Food and Water for the Planet.

Mr. John Gong is an accomplished entrepreneur who has demonstrated his capability in every aspect of leadership. He holds a double Master’s degree in Computer Science and Electrical Engineering from George Washington University and George Mason University and was a PhD candidate in Robotics from Stanford University. His experience began with Texas Instruments Co., Ltd., first as a system engineer, but later as the director of their Los Angeles Branch. He then moved to becoming the general manager of Matsushita and German Siemens in the western region and the general manager of American ENTIVITY Co., Ltd. in their Asian Pacific region. Mr. Gong then turned to entrepreneurship, impressively founding his own company, American ICP Inc., securing his position at the forefront of automated robot technology research and development, later rising to the head of the industry. As the CEO of Athena Technologies, the President of Wellintech USA LLC, and Chairman of American ICP Inc., LSJ Real Estate Co., Ltd and LV Investment Co., he is exemplary as an executive. Mr. Gong has proven himself a formidable leader in Chinese-American social activism, in which he is constantly involved. He served as a Director of the two largest businesses associations in the world, Rotary Club & Lions Club and served as the President of the ISA, Orange County chapter. He is also the Vice Chief Director of the China Council for Promotion of International Trade (CCPIT), an official Chinese organization, and Vice President of the China Economic Trading Promotion Agency and the Chairman of its Los Angeles branch. Mr. Gong has been featured multiple times in the magazines China’s Foreign Trade and China Economic & Trade Herald, and retains several awards and honours, including a European knighthood bestowed for his service in international trade relations.

Eco Safe Systems is the developer of a patent pending water treatment system used for food disinfection and water purification. Highly economic and completely organic, Eco Safe technologies use ozonated water to destroy bacteria and pathogens on contact, elongating shelf life, eliminating unpleasant odors, and preventing sickness. Their customized systems provide supermarkets and restaurants with a clean, cost-effective way to reduce waste and increase profits for fruits, vegetables, poultry, seafood, and more. Eco Safe has also developed water reclamation systems that have been proven to transform the most polluted water into water that is ready to drink. All products have been National Sanitation Foundation, International registered. Eco Safe is currently looking to expand their market into other industries and nations. For more information, please visit www.ecosafeusa.com.